Houdini's daughter is 'Born of Illusion'

Here's a fresh new take on Houdini fiction. Born of Illusion by Teri Brown features the adventures of Houdini's illegitimate daughter, Anna Van Housen (not a real person). The novel has just been published in hardcover by Balzer + Bray. Here's the jacket description: 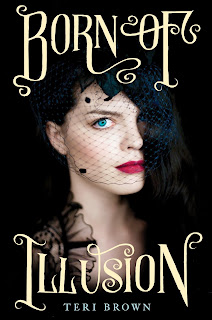 Anna Van Housen has a secret.

A gifted illusionist, Anna assists her mother, the renowned medium Marguerite Van Housen, in her stage show and séances, easily navigating the underground world of magicians and mentalists in 1920s New York. For Anna, the illegitimate daughter of Harry Houdini—or so Marguerite claims—handcuffs and sleight-of-hand illusions have never been much of a challenge. The real trick is keeping her own gifts secret from her mother: because while Marguerite's powers may be a sham, Anna possesses a true ability to sense people's feelings and foretell the future.

But as Anna's powers intensify, she experiences frightening visions of her mother in peril, which lead her to explore the abilities she's tried so long to hide. And when a mysterious young man named Cole moves into the flat downstairs, introducing Anna to a society that studies people with gifts like hers, she begins to wonder if there's more to life than keeping secrets.

As her visions become darker and her powers spin out of her control, Anna is forced to rethink all she's ever known. Is her mother truly in danger, or are Anna's visions merely illusions? And could the great Houdini really be her father, or is it just another of Marguerite's tricks?

From Teri Brown comes a world bursting with magic, with romance, with the temptations of Jazz Age New York—and the story of a girl about to become the mistress of her own destiny.


I don't have this book in hand yet, but checking out the Amazon preview I see that Houdini himself is an active presence throughout the book. At one point Anna goes and sees Haldane of the Secret Service:

"Mother doesn't know it, but I've been to all his movies. I missed this one the first time it came out and I'm torn, wondering if I should go inside. For me, watching a Houdini movie is like fouling up a trick onstage: It starts out great, then suddenly it's not, and you end up with a pit in your stomach, wishing you hadn't tried it at all."

You can purchase Born of Illusion by Teri Brown on Amazon.com.

UPDATE: Teri Brown has now published a sequel: Born of Deception.
Written by John Cox at 9:55 AM