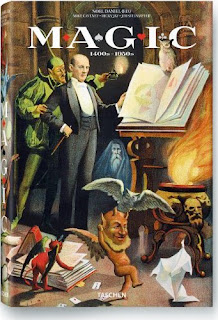 In 2009 Taschen released the mammoth MAGIC 1400s-1950s, a beautiful book that features hundreds of full color reproductions of rare magic posters and images, including several never-before-published photos of Houdini. (I covered the launch of the book at The Magic Castle here.) It was a big book with a big $200 price, but worth it.

Now Taschen has released a new edition of MAGIC 1400s-1950s which is smaller in size and in price. However, the page count is also reduced -- down from 650 to 544 -- so is this an abridged edition of the original book? I've emailed Taschen for details, but I've yet to receive a reply (see update below).

And if you want the original mega edition, it can still be found via third party sellers on Amazon, but it doesn't come cheap.

UPDATE: Re the differences between this and the larger edition, the following is from the editor of the book, Noel Daniel:

"The smaller version is meant to offer readers the chance to discover the wonderful world of magic for a great price. To be able to offer a smaller version of the first edition (the larger book) at a trade price, we did need to reduce its physical size, which meant also reducing its page count and therefore the image count. Even though the smaller version is reduced by ca. 150 images of the original 900, it is still a fantastic, illustrated overview of 500 years of magic. This material has never been brought together in this manner before, and much of it has never been published. I spent many, many months personally visiting archives and incredible private collections to select these images from the original 30,000 that I gathered. Both the large and smaller versions are important publishing events in the history of magic.

In terms of the images that I cut from the original larger size, of course, it was very hard, as all of the images mean a great deal to me. However, I tried to retain critical images that I felt readers would like to see, while cutting images that perhaps were repeated in some aspect or contained information that could be found in other images."


Thanks to Caitlin Rider and Taschen for this update.
Written by John Cox at 7:56 AM