Did Houdini play hero in a forgotten theater fire?

One of the great stories of magic involves Harry Blackstone Sr. averting possible disaster in 1942 when a fire broke out in a building next door to the theater during one of his performances. Blackstone was warned privately of the fire and told that he needed to stop the show. Realizing this could cause a panic, Blackstone stepped to the footlights and explained that his next trick was so big it would need to performed outdoors. He then led an orderly evacuation of the theater. Only then did the audience realize that the theater was in danger of burning down.

It's a great story and a part of the Blackstone legacy, but did Houdini perform similar heroics 17 years earlier?

In the new monograph Houdini & Gysel, author Wayne Wissner quotes a letter to Houdini from Robert Gysel in which he states:

"Understand that you was [sic] some hero at the Keiths fire in Indianapolis on apl 4th, that thru your coolness saved the spectators from being terrorized, Good for You." 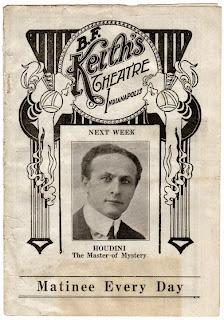 Now, in a wild coincidence (which happen to me frequently when it comes to HH), right after reading this passage in the Gysel book I logged onto eBay and saw this beautiful original program advertising Houdini at the Indianapolis B.F. Keith's Theater in March 1925. There's no date for the Gysel letter, but as this program says this would be Houdini's first appearance in Indianapolis in 10 years and the majority of the Gysel correspondence is from the 1920s, it appears this could very well be the week of the Keith's theater fire. (The program sold for $214.)

But the big question remains -- what exactly did Houdini do to "save the spectators from being terrorized"? I can't find any mention of this in any biography. I also tried to find news of a theater fire in Indianapolis on April 4, 1925, but turned up nothing.

I'll throw this one out to the Houdini detectives.
Written by John Cox at 11:26 AM