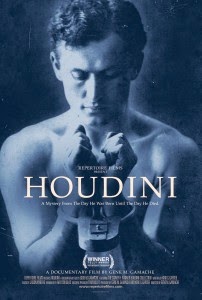 The award winning documentary Houdini will be screened at the Birmingham 8 Theaters in Birmingham, Michigan, June 7 to June 13. Director Gene Gamache will be on hand for a Q&A during screenings this Friday and Saturday at 7pm. Gamache will bring along a pair of Houdini handcuffs for display.

The Birmingham event is being touted as the theatrical "premiere" of the film. The documentary was originally released on VHS in 1996 by Unapix Entertainment as Houdini: People Came to See Him Die. It looks like it is getting a second life theatrically via Repertoire Films (check out the new trailer below). This is good news because this very fine doc has never made it to DVD.

"In the award winning film, Gamache uncovers the truth about Houdini's life. Recently uncovered personal papers and memorabilia help shed light on what drove Houdini to secure his place in history. In the documentary viewers will see never-before-seen archival footage and interviews with Houdini experts who focus on unlocking the myths surrounding one of the most compelling personalities of the 20th century."


Houdini will play on a double bill with another documentary by Gamache, A Circus Life, which profiles Charles "Chappie" Fox who rescued and restored hundreds of circus wagons.

The Birmingham 8 Theater is located at 250 N. Old Woodward, Birmingham, Michigan. More information about Houdini and future screenings can be found at repertoirefils.com.

Thanks to S. Sobolewski for the tip.
Written by John Cox at 9:56 AM