Houdini was the 25th person to fly

We all know Houdini was the first person to fly a plane in Australia. That's his aviation milestone and it's in the history books (no matter what cranks on Wikipedia say). But while listening to The Secret Life of Houdini audiobook in my car the other day (yes, I'm doing that), a sentence flashed by that blew my mind. Because it revealed what I think is an even more remarkable Houdini aviation fact:

"With Brassac on hand to assemble the machine and to instruct the fledging pilot, Houdini was poised to become the twenty-fifth man to conquer the air in a powered craft."


Twenty-fifth! Somehow I think this is even more impressive than being #1 in Australia. It's a remarkably low number. The Wright Brothers first flew in December of 1903. By 1909, when Houdini bought his Voisin bi-plane in Germany, I assumed hundreds of men had flown.

But this just shows how difficult it was to fly in those days. Not to mention that flying was also deadly. Not all of those 25 survived. It took nerves of steel to climb behind the wheel or what was essentially a motorized box-kite that could soar over 100 feet. But that's Houdini! 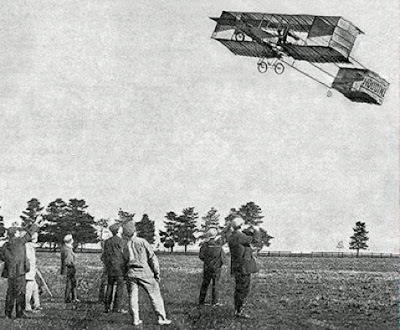 (Of course, I've not tried very hard to confirm this fact.)
Written by John Cox at 9:52 AM