'Watson and the Dark Art of Harry Houdini' playing in L.A.

It's certainly been a week of pleasant surprises. First comes word of a possible director for Summit's Houdini movie. Then Houdini (1998) is released on DVD. Now comes news of a Houdini play opening right here in my own backyard.

Watson and the Dark Art of Harry Houdini opens tomorrow, June 21, at the Sacred Fools Theater in Los Angeles. The play is written and directed by Jaime Robledo and will run through July 27. Here's a synopsis:

Sherlock Holmes and Dr. Watson tangle with master magician Houdini himself in the world premiere of a new whodunit featuring the famed detective duo. Sacred Fools follows up its hit show Watson: The Last Great Tale of the Legendary Sherlock Holmes with this novel mystery, which finds the brilliant twosome on the trail of a multiple murderer in New York City. But they find it difficult to sort fact from illusion when dealing with the always enigmatic Houdini, leading to excitement and even heartbreak.


Watson and the Dark Art of Harry Houdini stars Donal Thoms-Cappello as Houdini (understudied by Curt Bonnem), Scott Leggett as Dr. Watson, and Joe Fria as Sherlock Holmes. The play features an original score by Ryan Johnson and is produced by Brian Wallis, Brandon Clark, Laura Napoli and Abraham Benrubi.

This is one I'm definitely planning to see. 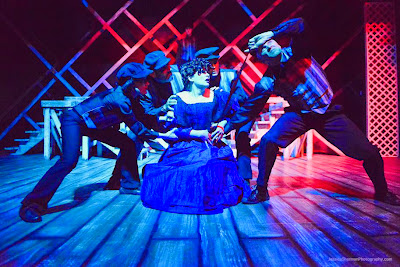 UPDATE: My review: Discovering the Dark Art of Houdini (and Jamie Robledo) in Hollywood.
Written by John Cox at 4:07 PM