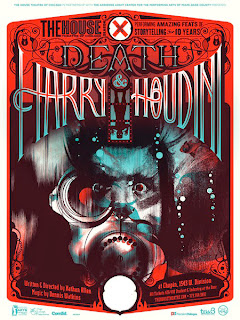 Death and Harry Houdini is written and directed by Nathan Allen and features magician Dennis Watkins as Houdini. In the course of the evening Watkins performs several of Houdini's most famous escapes, including The Water Torture Cell.

For more details and to buy tickets visit the House Theatre of Chicago website.
Written by John Cox at 8:58 AM

Email ThisBlogThis!Share to TwitterShare to FacebookShare to Pinterest
Tags: Plays