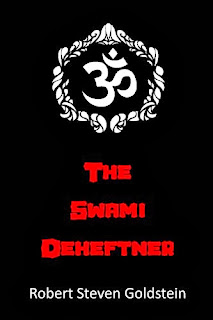 I initially passed on adding The Swami Deheftner by Robert Steven Goldstein to my shelf of Houdini fiction because Houdini doesn't actually appear in the book. However, the author generously made me a gift of his novel; and having now read it, I'd recommend this book even if it didn't have anything to do with Houdini!

This is a beautifully written, thought provoking novel which is also quite inspirational. (My mother did yoga her entire life, so I really enjoyed learning so much about the practice.) And, yes, there are many references and some keen insights into Houdini throughout the book. I could really relate to the main character who becomes fascinated with Houdini at a young age. Even the cover channels Houdini by using the font from his Europe's Eclipsing Sensation poster (this font is now called "Houdini").

Here's the description from Amazon:

In this evocative novel, Solomon Deheftner achieves fame as a stage magician and escapologist in the tradition of the Great Houdini. But he abandons that career to search for something far more elusive: the profound magic inherent in mystical transcendence. Using his knowledge of conjuring and his Jewish upbringing as a foundation, Deheftner makes his way from New York to San Francisco, probing the secrets of Yoga, meditation, vegetarianism, animal intelligence, bondage, and sadomasochism in his quest for spiritual enlightenment.

Robert Steven Goldstein was born in Brooklyn, New York in 1952. He has practiced Yoga, meditation, and vegetarianism for over forty years. Mr. Goldstein and his wife Sandy now live in the San Francisco Bay Area, and have lovingly shared their home with parrots, dogs, cats, rabbits, and turtles. Their daughter is married and lives in Texas. Prior to becoming a novelist, Mr. Goldstein enjoyed a successful, thirty-five year career in the corporate sector in executive level roles in healthcare information, and later as a consultant to charitable foundations and nonprofit organizations.


You can purchase The Swami Deheftner by Robert Steven Goldstein at Amazon.com. The book is available as a hardcover, paperback, and for the Kindle.

Thank you for the journey, Swami.
Written by John Cox at 8:31 AM