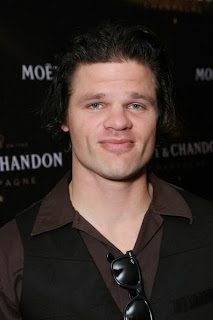 The Hollywood Reporter has landed another exclusive with the news that actor Evan Jones will be joining the cast of History's Houdini miniseries playing the role of Houdini's "nerdy assistant."

According to the report, Jones will play Jim, "a shy but passionate fan of Houdini's who meets his hero while working at a magic store." It's unclear if this "Jim" is supposed to be Jim Collins, Houdini's real life chief assistant and mechanic.

Jones' acting credits include Jarhead, 8 Mile, and The Book of Eli.

Houdini stars Adrien Brody as Houdini and Kristen Connolly as Bess. The 4-hour Lionsgate/A&E Studios co-production is set to begin production next month under the direction of Uli Edel.

UPDATE: According to IMDb, Jones is indeed playing Jim Collins.
Written by John Cox at 9:59 PM