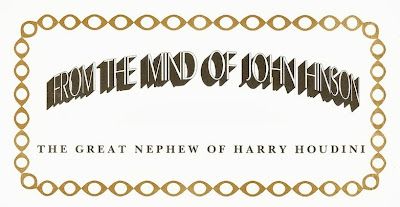 I have something very exciting to announce today. On this blog I've periodically been able share some rare images and items from the private collections of major Houdini collectors, including: Arthur Moses, Jon Oliver, Anna Thurlow, Patrick Culliton, Kevin Connolly, and the mysterious MSW. I've also been fortunate to receive many items from individual readers and fans. I only have a limited amount of Houdini treasures myself, so I'm thankful that so many have contributed to our little temple of Houdini study.

Now I've received what can only be called a major endowment of material that will power this blog for years. That's because John C. Hinson, the great nephew of Harry and Bess Houdini, has generously provided me with nearly 400 slides of Houdini photos, documents, and personal items from his private collection. These are treasures passed down to the Hinson family from Bess Houdini herself, and in this largely untapped cache are many unpublished photos of Harry and Bess. You got a taste of that in our BONUS interview with John's grandmother, Marie. Now John has given me permission to share as many of these images as I like here at WILD ABOUT HARRY. Oh baby...

The only catch is I need to convert these slides to digital photos. The good news is, thanks to all you who have used my Amazon links and/or clicked the occasional Google ad, I have a war chest of funds that makes this doable. So our shared passion has nicely come together in a magic moment and we are all about to be rewarded with Houdini riches!

Next week I will post the first image from the Hinson Endowment. I'm calling it the "Greatest signed Houdini photo EVER"...because it is. Then in October (depending on how quickly I can get the slides transferred) I will launch a new series called UNPUBLISHED HOUDINI. Here I will share a new never-before-seen photo of Houdini every week for the rest of 2013. I will also periodically pull from the endowment to do posts about specific items or illustrate relevant posts. As I said, this will power us for some time to come.

So please join me in thanking John C. Hinson for this generous gift from the other side of the Houdini family. Now let's go WILD!