The Travel Channel's Mysteries at the Museum last night featured a segment about Houdini and Margery the Medium. The focus of the segment was the original bell box used during Margery's seances with Houdini. The bell box is housed in the amazing private collection of Ken Klosterman, the Salon de Magie, in Loveland, Ohio. 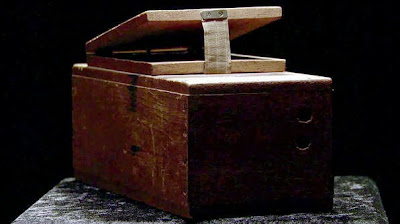 The magic historian for the segment was Gabe Fajuri and detailed the contentious Scientific American seances of 1924. The segment featured actors playing the parts of Houdini and Margery. The actor playing Houdini was a decent match. But the actress playing "the blonde witch of Boston" sported jet black hair for some reason. Still, it was well done, and it was great to see the Margery bell box up close.

For more on the curious relationship between Houdini and Mina Crandon, revisit The Margery Files from earlier this year, as well as our interview with Margery's great granddaughter, Anna Thurlow.
Written by John Cox at 9:01 AM