Here's another one for our Hollywood-Houdini development slate. The Hollywood Reporter (which seems to have the exclusive on Houdini exclusives lately) says that Todd Lieberman and David Hoberman's ABC-based production company, Mandeville, has set up five new projects at the Disney-owned network, among them "a modern take on Houdini." Here's THR's somewhat perplexing description:

Houdini will be written by Jeff Addis and Will Matthews and follows legendary illusionist Harry Houdini when he partners with an unusually gifted female detective to solve the cases that baffle the LAPD in what is described as a fast-paced modern-day procedural. The drama comes as History will unspool its four-hour Houdini miniseries with Adrien Brody attached to star. Addis and Matthews are repped by Gersh and Principato Young.


So if this is a "modern-day procedural," then how can it feature "legendary illusionist Harry Houdini"? Unless it's Houdini's ghost? Or maybe a descendant with the same name? Or maybe they are taking a Sherlock-like approach and transplanting Houdini into the present day as if he were a fictional character -- which would be as creative as it would be confusing.

Whatever they're doing, it's always good to have more Houdini out there. But the Houdini project I'm banking on in 2014 is History's Houdini miniseries which promises to give us the real Houdini (or as real as television gets).

Still, I'll be following this one. 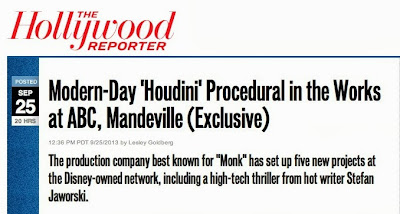 UPDATE: I've now heard that this is indeed Houdini's spirit come back from the beyond to help fight modern day crime. Alright.
Written by John Cox at 9:49 AM