Harlan and Bessie will teach you the Needles 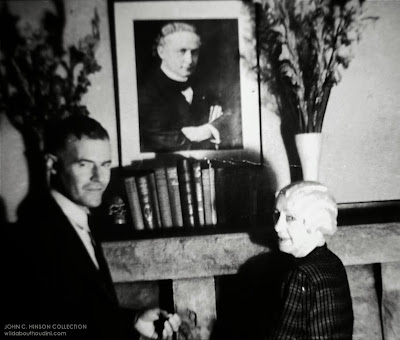 Here's an unpublished photo of Bess Houdini with Harlan Tarbell, author of the famous Tarbell Course in Magic. Not long ago Dean Carnegie at The Magic Detective revealed how it was almost the Houdini Course in Magic. Reportedly, Houdini was originally approached by the publishers to author the series. Houdini was too busy and instead recommended Tarbell. The rest is magic history.

So why have I pulled this photo from our new Hinson Endowment prematurely (I'll replace it with a better quality version later)? Because I thought this was a fun way to let you know that the Conjuring Arts Research Center is offering the original 1926–1929 Tarbell Correspondence Course as free PDF until September 22. This is the 11th and final offering in their Summer Reading Program, which also saw a free PDF of The Memories of Robert-Houdin.

This 1243-page PDF contains many references to Houdini and some escape methods. It also has 4-pages on the working method for Houdini's classic Needles!

First in this lesson, I give you the Famous Needle Trick. The eminent Houdini featured this wonderful effect on his vaudeville programs. He studied it detail by detail from the standpoint of SHOWMANSHIP, and in his hands it became a masterpiece. You, too, must study this effect carefully to make your presentation of it a thing which will make your audiences long remember you.


CLICK HERE to get a free copy of the Houdini...er, I mean, Tarbell Course before September 22 when it disappears.
Written by John Cox at 8:48 AM