American Legends: The Life of Harry Houdini available in paperback 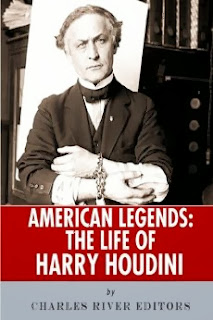 American Legends: The Life of Harry Houdini by Charles River Editors is now available as a paperback from Amazon. It had previously only been available as an eBook.

As I warned when the eBook was released, this is a 36-page quickie "book" that scrambles facts and lifts some of its content from Houdini's imperfect (to say the least) Wikipedia page. The photos have all been sourced from online as well.

Still, I'm happy to see it offered in a printed edition and I will be adding this one to the bookshelf. One for completists.

Purchase American Legends: The Life of Harry Houdini from Amazon.
Written by John Cox at 10:18 AM