Last week I shared from our Hinson Endowment what I called the Greatest signed Houdini photo EVER. This week I offer what might very well be the greatest Bess Houdini photo ever. This beautiful 8x10 of Bess appears to have been taken around the time of the Final Houdini Seance in 1936 and is one of the only color photos I've ever seen of her. It's tinted rather than being from a color negative, but it's still awesome to see Bess come to life in this way. 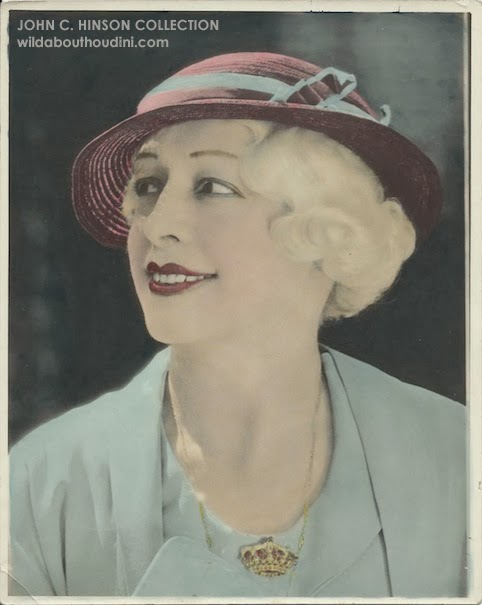 Aside from the color, are some other interesting things about this image. First, I believe she is wearing her famous Czar's brooch. This can also be spotted in some younger photos of Bess. Today that brooch is owned by Arlene Larsen who wears it at special Magic Castle events. This photo also offers a rare look at Bess's teeth. Bess did not often show her teeth in photos, possibly because she was self-conscience about two crooked incisors (recall that her sister said in this audio that Bess "never let anyone see her teeth."). Well, her teeth look fine to me here. In fact, I think she looks radiant!

Okay, here's something else about this photo that I have to share, but this one is a bit strange (yes, stranger than talking about her teeth). When I first uploaded a scan of this photo to my Picassa Web Album, under this photo appeared a caption that read: "My beautiful picture." I did not write that caption. The caption appeared all by itself and just on this photo of Bess. Later I uploaded several more scans, two of which were unpublished photos of Bess. On those images and those images alone appeared the caption: "My beautiful picture."

Thanks as always to John C. Hinson for allowing me to share this unique family treasure.
Written by John Cox at 7:56 AM