Jack Rabbit was a Houdini bunny

What better way to celebrate Easter Weekend than with a bunny tale and a nifty bit of Houdini trivia. Apparently the rabbit on the label for Jack Rabbit Brand Beans was Houdini's bunny! The story is here in this Jack Rabbit Brand brochure and on the Trinidad Benham website:

The Jack Rabbit brand started in Saginaw, Michigan in the 1920’s, at a Harry Houdini magic show. Houdini called for someone from the audience to help with his rabbit-in-the-hat trick, and promised the rabbit to whoever would come up on the stage. Ten-year-old Phyllis Reidel, daughter of the founder of Michigan Bean Company, excitedly volunteered.

In 1935 when Mr. Reidel and Henry Jahn of R.S. Porter were searching for a name for their new brand of beans, Al Reidel laughingly recalled the Houdini rabbit and decided that a dynamic jumping jack rabbit would be the new corporate logo of the Michigan Bean Company. Who knew that 75 years later, the Jack Rabbit brand would be what it is today? Maybe no one – except Houdini!


Now, I should mention that I've never heard of Houdini giving out rabbits as part of his act. I believe that was a practice of Harry Blackstone Sr. Is it possible the Reidel family confused their Harrys?

You can read a less sanitized version of this bunny tale, including what eventually happened to "Jack" (spoiler: he was delicious) at waymarking.com, which has a page devoted to the historic Jack Rabbit Beans neon sign in Saginaw, MI. 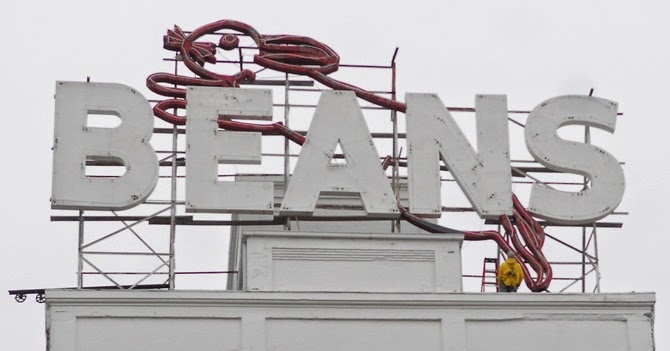 Be sure to visit WILD ABOUT HARRY tomorrow, Easter Sunday, for a unique personal artifact from the collection of John C. Hinson.
Written by John Cox at 9:49 AM