Has HISTORY locked up 'Houdini' until Fall? 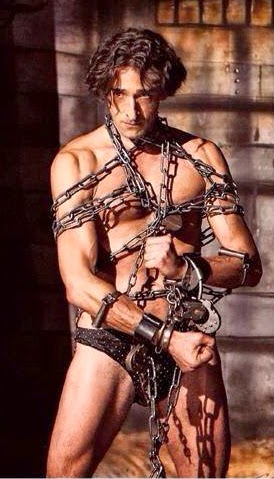 Last week HISTORY repeated their "Houdini Handcuffs" episode of Pawn Stars. I recorded it in the hopes that we might see the first ad for their Houdini miniseries, which, according to Entertainment Weekly, is set to air next month.

Instead I saw a promo for The World Wars, a 3-night miniseries set to air on HISTORY and H2 starting on Memorial Day. This was the rumored time slot for Houdini. So what's up?

I might be jumping the gun here, but I'm thinking we may have to wait a while longer before we see Adrien Brody slip on the straitjacket. I'm guessing the Houdini miniseries will now air in Fall, probably around Halloween. The Houdini Halloween connection has proven irresistible to television networks in the past. Recall that The Great Houdinis originally aired in October. This would also explain the dearth of publicity at the moment.

I've been trying to get some official word out of HISTORY, Lionsgate, and A+E Studios, but getting basic information about this miniseries has been harder than prying secrets out of a magician.

Houdini stars Adrien Brody as Houdini and Kristen Connolly as Bess. The 4-hour miniseries is directed by Uli Edel from a script by Nicholas Meyer. It co-stars Evan Jones as Jim Collins, Eszter Ónodi as Cecilia Weiss, and Tom Benedict Knight as Theo Hardeen.


Click here to view all the news on the Houdini miniseries.

UPDATE: It's now confirmed that Houdini will air in Fall.
Written by John Cox at 7:11 AM