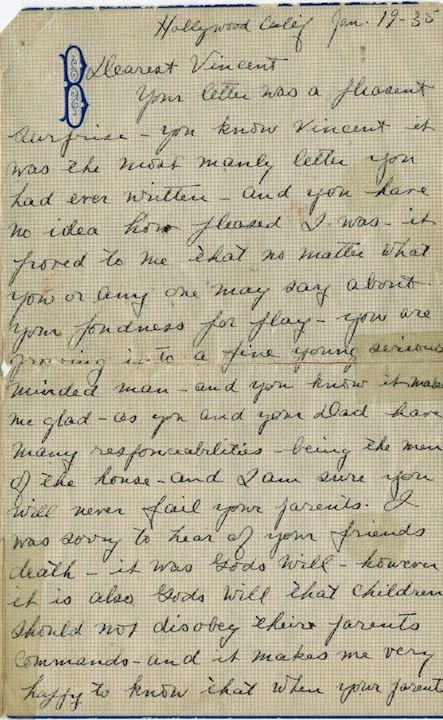 A few weeks ago a truly incredible letter from Bess Houdini to her nephew Vincent sold on eBay for $434. Vincent Ehrich Hinson was the son of Bessie's closest sister, Marie, and the father of our friend and benefactor, John C. Hinson. I didn't blog about this at the time because there's a story behind this letter and this auction that I couldn't really share until now.

This letter was a cherished part of the Hinson family collection. It was the only letter from Bess that Vincent had saved. But it was recently lost in storage. In fact, John Hinson discovered the loss when he went to make a copy of the letter for me as part of our Hinson Endowment. Then the letter showed up on eBay via a seller that the family did not know.

The good news is the letter is home! The letter was purchased by Houdini collector and close family friend, Jon Oliver (the man who sleeps in Houdini's bed), who returned it to the Hinson family yesterday. I'll let Jon tell the story himself:

A couple of weeks ago, while coming back from New York, I was talking to a friend named David Sigafus on the phone. David is a magician, and he and I were the adopted sons to another magician named Rev. Robert Olson. Rev. Bob was an world expert on Howard Thurston, as well as many others. David and I are both history nuts to ALL things magic, and talk often about things we see or acquire.

David knowing of my fondness for Houdini told me about a letter from Bessie for sale on Ebay. As he described it, he turned on the computer and brought up the link. The letter was addressed to Vincent Hinson, and written in 1935. It was also being offered by a dealer in Mass., near where John Hinson lives.

I was a little shocked because any letters from the Houdinis to any of Marie Hinson's family in that area of the country would be in John Hinson's ownership. Telling David this, I called John and confirmed what my thoughts were, and when after unpacking, I wrote this seller asking him to call me. The next day when he called I tried to explain how the letter belong to John's father and that either a family member took it, or it was stolen at a show.

Becoming a little gruff, he told me he hears that story all the time, and how could he believe me. He was told how Vincent Hinson was John's father, and Bess was his aunt. If he didn't believe me he could check it out himself, and he was given John's number. I also gave him the name of Ray Goullets magic shop in Watertown, and told him Ray will confirm John's honesty.

20 minutes later he called me back and told me he had confirmed my story, but wouldn’t pull the auction.

John called me, and said the guy told him there is really no way John could prove it, but said if John really wanted it back, to put a really high bid on it. Like $5000.00 and if it went over that amount he would eat the difference. My wife Melissa and I talked about this, and agreed the fellow was trying to shill bid it up much over what it was worth.

In the listing on Ebay it said there was a Houdini photo with it, that the seller claimed was a copy, and it would go with the letter. Turns out it is an original 11x14 photo of Houdini.


As I said, Jon returned the letter yesterday, but he was able to keep the original Houdini photo, which alone is worth the price of the auction. It's a bit of poetic justice that the seller didn't realize what he had there.

This amazing letter (transcribed below) was written on January 19, 1935 while Bess was living in her Laurel Canyon house in Hollywood ("right here in the mountains it is so beautiful"). Twice she evokes "Gods Will", showing that she was more outwardly religious than her husband. It also shows that she was, ironically, the more literate of the Houdinis. Her letter is not filled with the misspellings and what Ken Silverman calls the "tortured grammar" of her husband's letters. I'm not sure what accounts for the difference as it's unclear if Bess had any more education than Houdini, and she was also raised with German speaking parents.

Bess also makes mention of their "sad memories of Harry's tragedy." This is not a reference to her late husband, but to the premature death of Harry Houdini Hinson. This is an untold story that I will be sharing soon here on WILD ABOUT HARRY.

Below is a wonderful unpublished photo of Vincent Hinson, courtesy of John Hinson. It shows him with the famous Houdini bust and Mirror handcuffs. He is holding a Houdini magic wand. Happily, this photo has remained safe in the family collection. Now his letter is home as well!

Your letter was a pleasant surprise - you know Vincent it was the most manly letter you had ever written - and you have no idea how pleased I was - it proved to me that no matter what you or any one may say about your fondness for play - you are growing into a fine young serious minded nam - and I am sure you will never fail your parents. I was sorry to hear of your friends death - it was Gods Will - however it is also Gods Will that children should not disobey their parents commands - and it makes me very happy to know that when your parents asked you not to go sleighing - that you obeyed them. You know their sad memories of Harry's tragedy is still very deep - and you must help them never to have cause for any more. It is really very little to give up isn't it? Some day when you become rich you must come to California - and right here in the mountains it is so beautiful - I wish I could have you during your Summer Vacation - but alas it costs too much - but and this is a big but - you will have the entire vacation in Rye - that isn't so bad either is it? And I'm going to whisper a secret to you - keep it to yourself for awhile - maybe if all turns out as we hope it will - we may take a trip to N.Y. this coming July - I did not say anything to your mother or Marie - because I am not yet quite sure that I can take the trip - but as you are one of the men of the house - I can tell you the secret - and you can tell your Dad - but not the women folks - they would take to worrying - and I do not wish to have them worry - but won't it be grand to be together again? I'm all excited about seeing you all again - and I'll bring Satan along - you will love him.

Well Dear Vincent - I want to thank you also for your congratulations on my birthday - and write soon - Edward sends his best to you.

Lots of love from your Aunt Bess
(Mrs. Harry Houdini)


Thanks to John Hinson and Jon Oliver for sharing this remarkable letter and the story behind it.

UPDATE: In case you're wondering who "Satan" was; Jon Oliver tells me it was Bessie's pet marmoset monkey, which was vicious, hence the name.
Written by John Cox at 7:52 AM