This is an excerpt from Houdini's 1925-26 full evening show program highlighting his early days as a runner. Athletics were a true passion of young Ehrich Weiss. What I like about this is it shows an uncommon shot of the young Houdini in the uniform of the Allerton Club, which pre-dates the more well-known shot of him from the Pastime Athletic Club. I also find it interesting that it states Houdini "is not a believer in Prohibition," which was the law of the land at the time. 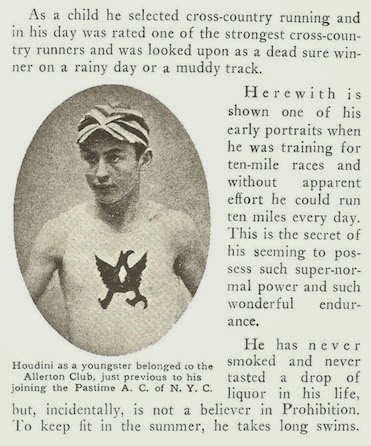 You can read more about Houdini's pre-magic days as a young athlete HERE.
Written by John Cox at 10:18 AM