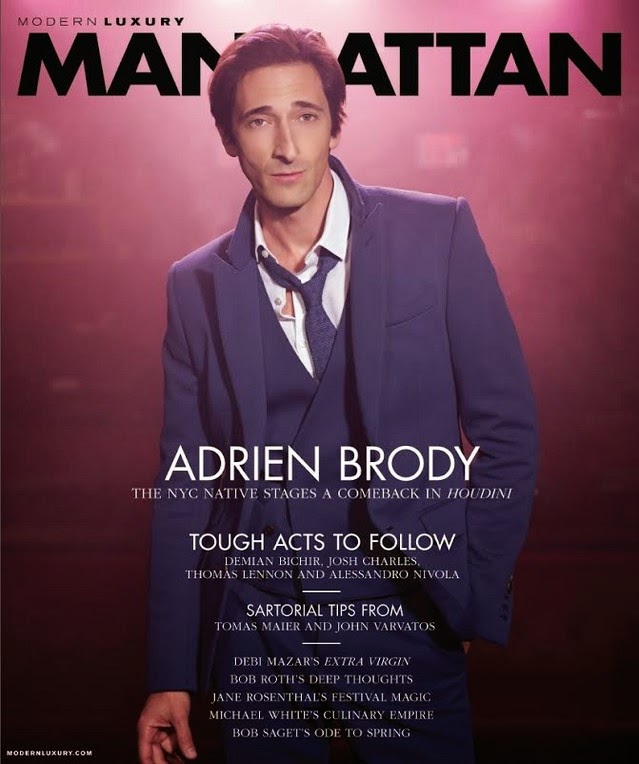 Adrien Brody is on the cover of the April MANHATTAN Magazine along with the tagline: "The NYC native stages a comeback in Houdini." Inside is a profile on Brody by Andrew Myers which includes a nice mention of the upcoming miniseries:

In a conversation with the actor in Los Angeles following the 86th Academy Awards last month, Brody is clearly thrilled to have focused his powers on this particular project: "Harry Houdini is one of my heroes and has been since childhood, not only because he was the greatest magician and escape artist of all time, who escaped the confines of chains onstage, but because of his fearless, adventurous nature," Brody says. "He also escaped the chains of poverty and bigotry—and his audiences and the public understood this grand metaphor."


You can flip through the digital edition at the MANHATTAN website. This a regional magazine, so this same article appears in Modern Luxury's ANGELENO (Los Angeles), RIVIERA (San Diego), MIAMI, etc. But it looks like MANHATTAN is the only one with a mention of Houdini by name on the cover, so...

Adrien Brody's 4-hour Houdini miniseries co-stars Kristen Connolly as Bess and will air on HISTORY this year.
Written by John Cox at 9:12 AM