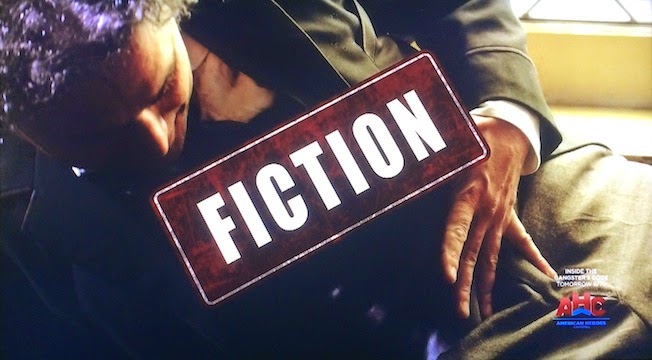 Houdini is the subject of a new episode of America: Facts vs. Fiction called "Masters of Illusion" (Season 2, Episode 8). The episode also features P.T. Barnum and premiered November 25 on AHC (American Heroes Channel).

The episode primarily debunks the myths that physical abnormalities aided Houdini's escapes (such as the ability to dislocated his shoulder), that he was trapped under ice during a bridge jump, and the belief that he died in his Water Torture Cell. However, their conclusion that the Whitehead punch did not cause Houdini's fatal appendicitis is still debatable.

Houdini is portrayed in the reenactments by James Christopher Crooke (above). The episode also features clips from Haldane of the Secret Service, The Man From Beyond, Terror Island, and Houdini (1953).

The show was well done and the focus on facts is a welcome change from the shameless myth-making of shows like Brad Meltzer's Decoded and, of course, that recent effort by our friends at HISTORY.

You can buy America: Facts vs. Fiction: Masters of Illusion as a download on Amazon.