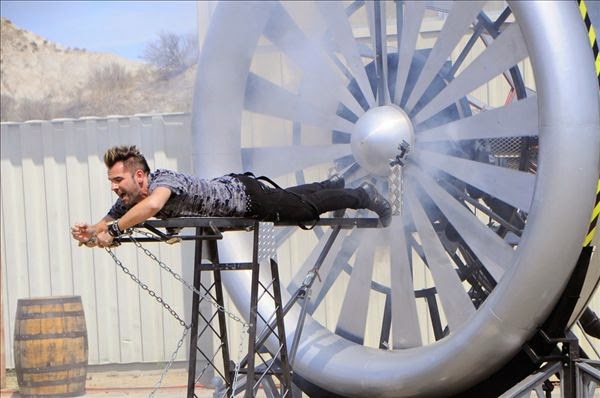 A new series called Extreme Escapes is airing on REELZ. The series was originally to be called Sons of Houdini. Shame they changed the name. Here's a description;

Each one-hour episode of Extreme Escapes brings the shock, wonder and danger of escapology to television with astonishing performances by artists including America’s Got Talent contestant Spencer Horsman, Masters of Illusion LIVE! performer Farrell Dillon, Las Vegas Laugh Factory’s headlining comic magician Murray Sawchuck and his counterpart Jan Rouven and Hungarian escape artist David Merlini. In Extreme Escapes top escape masters challenge the laws of physics in unbelievable stunts performed all around the world including magician Brandy LaPlante attempting to be the first woman to complete the insane car drop escape before being crushed and magician Michael Turco’s attempt at a mobster-style challenge where he’s shackled, put in cement shoes and tossed to the bottom of the Atlantic Ocean. Other daring stunts attempted include illusionist Jonathan Pendragon putting himself in the line of fire for a dangerous and often deadly feat—attempting to catch a speeding bullet. The series also features a precarious escape set in China where internationally acclaimed illusionist Franz Harary must break free from the chains binding him to railroad tracks in the face of a powerful locomotive.

Learn more about Extreme Escapes at the REELZ website.
Written by John Cox at 6:03 PM