An 1856 edition of The Confessions by J.J. Rousseau inscribed by its owner "Ehrich Weiss" magically blew past its estimate of $1,000-1,200 and sold for a healthy $13,800 (including the 15% buyers premium) in today's Haversat & Ewing Galleries magic auction. The buyer's ID name was "Copperfield", which is either someone being cute, or it really was the magic man (he did win most of the high-end lots). 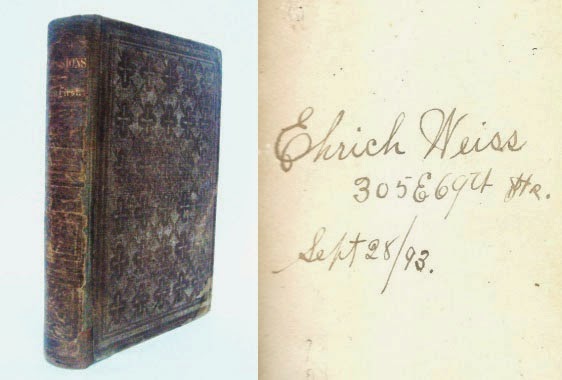 It's pretty rare to see an Ehrich Weiss signature of any kind come up for auction. What's especially interesting here is the date of 1893. This is two years into his professional career as "Harry Houdini", yet he still thinks of himself as Ehrich Weiss. Perhaps the act of getting married the following year was what finally made him shed his boyhood name.

Overall, the Houdini items did extremely well, with most selling for well above their estimates. The Houdini Bible fetched $6,238. A Houdini lock pick unlocked $3,018. A letter that mentions H.P. Lovecraft went for $2,817. A rare Dutch advertising card sold for $2,213. A pair of leg-irons grabbed $2,415. (All prices include the 15% buyers premium.)

The lot that I was after (but didn't win) was a Souvenir Program from Houdini's 3 Shows In One. While these aren't particularly rare (and there was a nice reproduction done by Lee Jacobs in 1979) what drew me to this program were the words: "Coast to Coast Tour - Season 1926-27" on the cover. I don't recall ever seeing this on one of these programs before. The fact that Houdini's second season was to be a "coast to coast tour" (his first season didn't travel beyond Illinois) is also a new piece of information to me. Presumably, this would have meant a stop in Los Angeles, which would have been his first appearance in LA since 1923. I wonder what theater he would have played?

Congrats to all the winners, and to Haversat & Ewing for another successful magic auction.