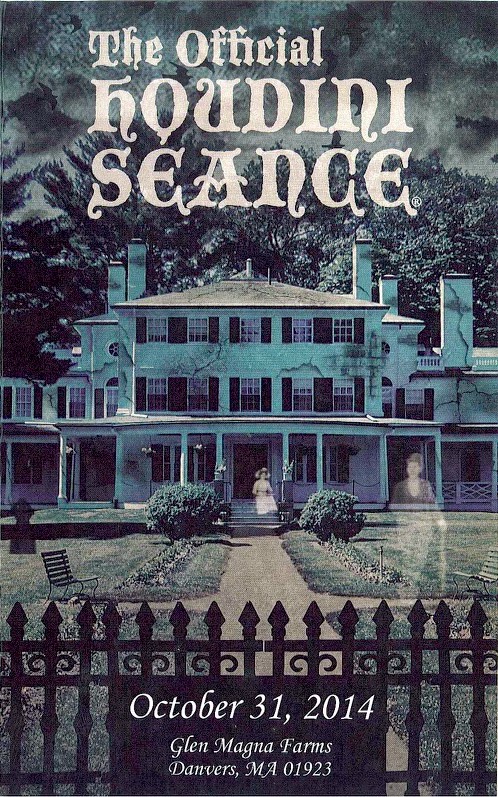 This year The Official Houdini Seance was held at the Glen Magna Farms in Danvers, Massachusetts, the country estate owned by the Danvers Historical Society. Once again, it appears to have proven itself to be the Rolls Royce of Houdini seances, and another great success for co-directors William Radner and Thomas Boldt.

Pre-seance entertainment was provided by magicians Evan Northrup and Eric Robitaille, who both came via the recommendation of Vince DeAngelis, owner of Diamond's Magic, who also helped organize this year's event. Dr. Gene and Jennifer Yee closed the evening with Metamorphosis. "They were great," says Bill Radner. "The viewers were blown away and clapped with intensity seldom seen at this type of event."

The medium this year was Anastasia Zimeris from Salem who, according to Bill, "captivated the audience with emotion." The Inner Circle was made up of: Tom Boldt; William Radner; Vince DeAngelis; William Kalush; Evan Northrup; Fred Pittella; Eric Robitaille; Robert Somerdin; and Jennifer Yee.

While Houdini himself didn't attend, Bill felt this was a seance to remember: "Glen Magna is on a farm away from civilization and it created an intimacy that recreated the feeling that existed in the early 1900's. We had a cozy room occupied by a little over 30 people eager to indulge in the aura of Houdini. The regular Inner Circle members were not able to make contact with Houdini, but Tom Boldt and I along with Rob Somerdin, Fred Pittella, Jennifer Yee and Bill Kalush knew Houdini (and my father) would have been proud."

Here are some photos of the evening courtesy of Bill Radner and Robert Somerdin.


You can read a detailed account of the evening in The Salem News: Houdini's spirit summoned to Danvers. Also read this article in the Appleton Post Crescent about seance co-director and devoted Houdiniphile Tom Boldt: Boldt CEO spends Halloween in search of Houdini.