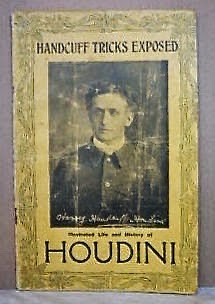 An uncommon edition of Houdini's standard pitchbook sold today on eBay for $801.68 (condition might have held this back from making even more). The auction says this was printed by The Caxton Press, Furnival Street, London, E.C. No date is given.

Houdini's pitchbooks were issued with several different covers and contain wide varieties of subtle variations. The inside of this edition states: "Three Million of these Books in circulation since 1900, in various forms, Editions and Languages."

Collector John Bushey has undertaken the task of collecting and/or documenting all of Houdini's pitchbooks (as well as those of his imitators) as part of his massive "pitchbook project." You can see many of those pitchbooks at John's site HERE.