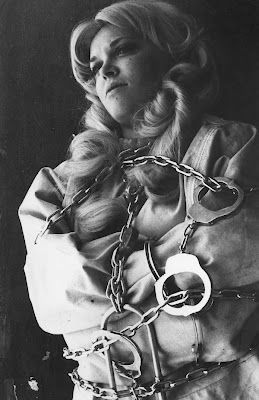 If you're in Los Angeles and can free up some time on Tuesday, March 24 (Houdini's 141st birthday), here's your chance to meet the legendary Dorothy Dietrich, magician, escape artist, and co-curator of the Houdini Museum in Scranton, PA.

Dorothy and Dick Brookz are coming to Hollywood to introduce The Grim Game during its world premiere at the TCM Classic Film Festival. To welcome them, I'll be giving Dorothy and Dick a personal tour of all the Houdini sites of L.A. on Houdini's birthday.

Our first stop will be at 10:00AM in front of the Hollywood Heritage Museum, which was headquarters for the original Famous Players-Lasky Studio where Houdini made The Grim Game. We thought it would be fun to throw open an invitation for one and all to come meet Dorothy at our first stop. Come get an autograph, watch her do some magic, and hear first hand how she and Dick Brookz helped uncover Houdini's long lost silent film and aided in TCM's restoration. Media is also welcome.

We will then fan out across Los Angeles in search of Houdini. While this isn't a public tour per se -- I will just be scooting them around in my Prius -- you are still welcome to join us at any of our stops. We will be in Hollywood in the morning and downtown Los Angeles and Glendale in the afternoon. While I don't know the exact time of any of the stops, I will live tweet each upcoming destination @HoudiniWild. That way you will know when we are close and you can come out and meet a legend (and learn all about that particular Houdini site).

So come and meet Dorothy Dietrich and Dick Brookz on Tuesday, March 24 at 10am in front of the Hollywood Heritage Museum located at 2100 North Highland Avenue (directly across from the Hollywood Bowl). Or follow me at @HoudiniWild and join us along the way.

This kicks off what is going to be a spectacular week of Houdini in Hollywood!

You can read profiles of Dorothy and Dick at the TCM Classic Film Festival website. Also check out The Houdini Museum's own press release for a preview of some of the stops we will be making on our tour of Houdini's Los Angeles.