The Grim Game reviewed in 1919

As we countdown the hours to the premiere in Hollywood of TCM's restoration of Houdini's The Grim Game, check out this review of the film from the November 1919 issue of Photoplay. 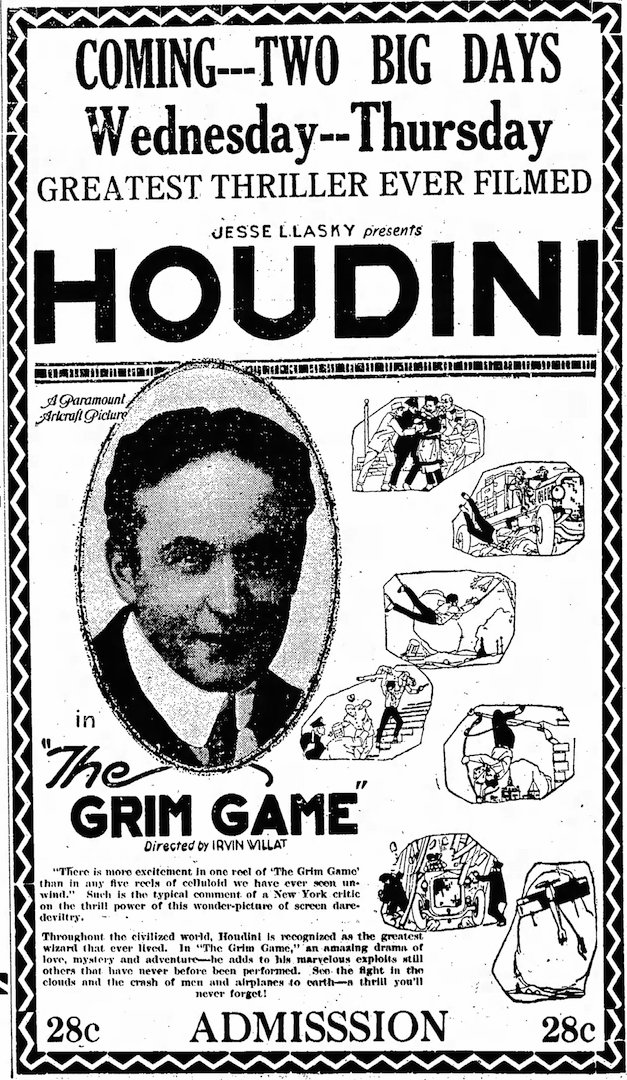 This is the best play Harry Houdini has ever grappled with, or wiggled himself out of, and it is the best of school which may be described as trick melodrama. In other words, all of Houdini's celebrated stunts, such as shaking off a set of bracelets, withering out of a straight-jacket, or breaking half a ton of manacles are included, but there are also many new and entirely localized manifestations of his diabolic cleverness; and almost all the feats, escapes, and what-not are part of a well-woven, logical plot. Includes in this five-reel fracas, also, is the actual air-collision which stirred Hollywood a few months ago. Two machines, performing at altitude for Houdini's play, accidentally crashed together and fell to earth wreaking themselves, but fortunately not killing and of the occupants. Ann Forrest -- who, at Triangle, was known as Ann Kroman -- is a delightful ingenue lead in the adroit Harry's adventures; and the cast includes, also, Mae Busch -- reappearing after nearly two years absence: she was formally at Keystone -- Anothy Boyd, Tully Marshall and Augustus Phillips.


The world premiere of TCM's restoration of Houdini's The Grim Game will take place at the Hollywood Egyptian Theater tonight at 8:15pm.