Catch your first glimpse of The Grim Game

We are now only a matter of weeks before Houdini's The Grim Game returns to movie screens with the world premiere of Rick Schmidlin's restoration at the TCM Classic Film Festival in Hollywood, March 26-29. Now you can get your first brief glimpse of the long lost Houdini film at the festival website. The latest promotional video on the main page contains a mention of the movie along with two quick clips starting at 00:40 and, well...CHILLS!!! 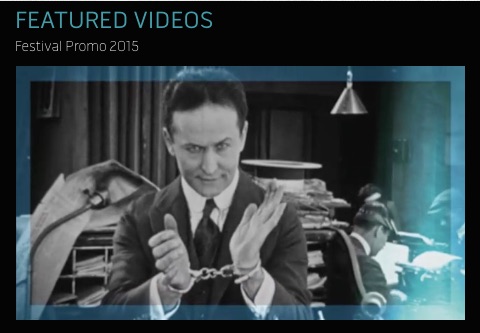 I know a great many of you are dying to know details of The Grim Game screening -- time, place, how to get tickets, etc? I know some of you want to make travel plans. All I've been able to nail down at the moment is that the screening will take place on Sunday, March 29, the last day of the festival. It will be attended by restorationist Rick Schmidlin and musical composer Brane Živković.

As far as tickets go, it looks like the best way to see the film is to get a festival pass, but those aren't cheap, and its not yet clear which pass includes admission to the Houdini movie. However, I've been told by friends who have attended the festival in the past that individual tickets are sold at the door at the time of the screenings, and they rarely sell out. But this is depending on the theater size, and it's not yet known where the Houdini film will screen (please be at the Chinese!).

Everything else there is know at the moment is on the TCM Festival website.

I will keep drilling for info and report what I can as soon as I can. It's getting exciting!