Today we have the conclusion of Neil McNally's fascinating examination of Houdini's testimony before Congress in 1926. Will Houdini triumph over the "rabid" mediums of Washington D.C.? 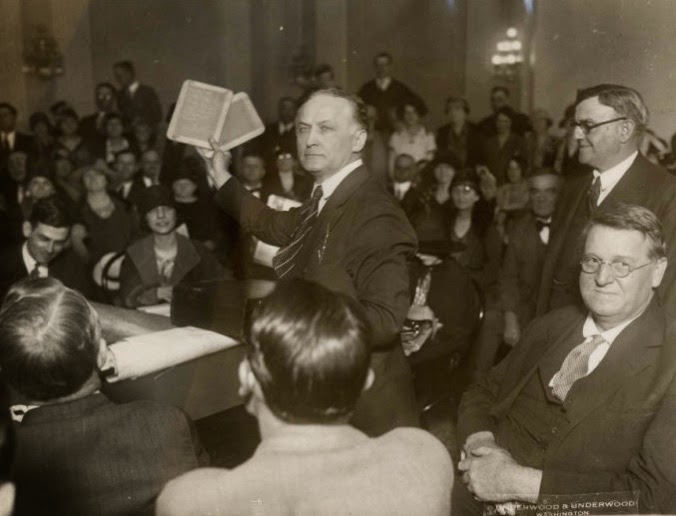 As we return to the proceedings, it’s worth noting that Houdini had been through a lot throughout these hearings. While he may have been accustomed to a well-deserved red carpet being extended to him before, what he faced here was a room of cold and apathetic Congressional Representatives. Many of them it seemed were unimpressed by his over thirty years of experience and expertise in magic, sleight of hand, and, most importantly, spiritualism.

However, Harry Houdini had dealt with much, much worse in his long career. So, when the hearings adjourned in May of 1926 he had brought with him a special weapon. It was a weapon that had been by his side for many years, and one that he truthfully valued beyond any pick, lock, or key. Her name was Beatrice Rahner, but in the annals of magic history she was known simply as Bess.

(Laughter from the audience)

Step this way Mrs. Houdini. One of the witnesses said I was a brute and that I was vile and I was crazy. Won’t you step this way? I want the chairman to see you. I will have been married on June 22nd, 32 years to this girl…There are no medals and no ribbons on me, but when a girl will stick to a man for 32 years as she did and when she will starve with me and work with me through thick and thin, it is a pretty good recommendation. Outside of my great mother, Mrs. Houdini has been my greatest friend. (To Bess) Have I shown traces of being crazy, unless it was about you?

(More laughter from the audience)

To say this exchange was not a calculated move on Houdini’s part is a vast understatement. With three simple words, Bess Houdini continued a long tradition of assisting her husband in times of dire need. While in this particular case their conversation was firmly tongue and cheek, it gives readers an endearing glimpse of how much Houdini loved and respected his wife. To hear him use the words “best friend” to describe her is a prime example of some of the many unique treasures this transcript holds.

Considering that the hearings were being held in Washington D.C., it’s ironic that the testimony eventually turned to one of the country’s founding fathers, Abraham Lincoln. As Lincoln was long rumored to have been interested in spiritualism, Houdini addresses the subject after Jane Coates let it cryptically slip earlier that some of D.C.’s most influential politicians, along with President Warren G. Harding himself, weren’t adverse to visiting mediums for some “otherworldly” advice.

Henry R. Rathbone (Illinois): Mr. Houdini, just a question or two, if you please. The question about Abraham Lincoln and his beliefs is brought up. I do not think it’s material to this bill, but you say you have investigated it and you know he was not a spiritualist.
Houdini: His son says so. I will read it if you wish (A letter from Robert Lincoln, Abraham Lincoln’s last surviving son, to Houdini). It is written to me and dated September 28, 1925. The importance of that is that they (the spiritualists) always use a great man’s name to get converts.
Rathbone: I think you will all agree who know about Abraham Lincoln that he was not a spiritualist as spiritualism is understood. Abraham Lincoln, if the authorities are correct at all, did believe and seek a number of times in his life, and spoke on the morning of his last day, of having a premonition of coming death. Is it your understanding that that has any relation to spiritualism?
Houdini: I believe in premonition absolutely, but, not in spiritualism…I believe in the subconscious mind, in the hereafter, in the Almighty God. But, I do not believe that the disembodied spirit can come back and do the things that the mediums claim that they can do…I have no malice against any mediums. They say I am quarrelling with their religion but that is their smoke screen…The money they charge means nothing. It is only the opening wedge to get fortunes, to get hold of some old man or lady and bring back (their) beloved dead.

It’s obvious from the preceding paragraph that while he denied it, Houdini rightfully did hold malice towards the spiritualist campaign and their actions against the innocent. In fact, as the hearing neared its end Houdini’s patience was tested when a line of bizarre, rapid, and suspicious questioning was directed at him by William C. Hammer of North Carolina.

The questioning continues on in a similar circuitous nature until Houdini reaches the limit of what even he can take.

And in the End…

As one turns the pages of the transcript, it’s all hard to know where it will all lead. As Houdini sat there about to present his closing statements to the assembled parties he had to have wondered the very same thing. However, as the transcript shows even without his standard arsenal of tricks Houdini was always true to himself and the moral bigger picture at hand.

Houdini: Mr. Chairman, I think there has been enough said. In closing my support for the bill I wish to say that there are 500,000 vote less people here in the District of Columbia. The law as presented there positively does not interfere with anyone’s religious beliefs. They do put jokers in laws the way they have in a number of states, and there is one that I would like to warn the committee against. When I say warn I want to amend that…Now here is the joker in the law placed in there by the spiritualistic associations:

I claim Mr. Chairman, and ladies and gentlemen, that this absolutely gives the spiritualist a 100% power to tell fortunes and do everything. One counteracts the other.

What eventually became of the bill? Had spiritualism had its day in the sun? Was Houdini, as usual, victorious in the face of adversity? Sadly, not this time. For reasons still speculated on today, Bill H.R. 8989 did not pass into law and stands as one Houdini’s few failures. Perhaps, as it seemed, politicians and mediums did make likely bedfellows after all.

Regardless of the outcome, Houdini simply and matter- of-factly stated that he had “performed a public service by exposing fraudulent mediums who prayed on the vulnerable, gullible, and bereaved.” In a modern age where fictional heroes light up our movies screens and comic books, it’s comforting to know that once upon a time there was a real flesh and blood hero who used his experience in dime museums, theaters, and séance parlors to benefit society’s greater good. For these reasons alone, it’s hard not to see what made “The Great Houdini” truly great!


Please join me in thanking Neil McNally for this terrific three part series. And be sure to visit Neil's website at neilmcnallywriter.com to see his other work.

This weekend I'll continue the theme of Houdini in Washington D.C. with a look back at his very first visit in January 1906 and his most spectacular jail escape.