Breaking: Houdini and Conan Doyle series picked up by Fox 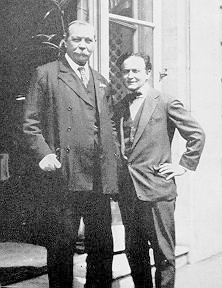 EXCLUSIVE: A supernatural crime drama inspired by the unlikely real-life friendship between Sherlock Holmes author Sir Arthur Conan Doyle and illusionist Harry Houdini is headed to the small screen in the U.S., UK and Canada. I’ve learned that Sony Pictures TV has sold the 10-episode series to Fox, the UK’s ITV and Canada’s Shaw Media. Titled Houdini And Doyle, the drama — which will go straight to series — hails from The Librarian franchise creator David Titcher, House creator David Shore and House writer-producer David Hoselton. Canada’s Shaftesbury and the UK’s Big Talk co-produce, with Sony TV, where Shore is under an overall deal, distributing worldwide. Fox had no comment.


I'm not going to get too excited about this until we get some more concrete news, such as casting or an air date. In the past few years we've had news of several Houdini TV series being purchased by networks -- including one that featured the "steampunk" adventures of Houdini and Doyle -- and nothing ever came of those. But this sounds like something more than just a development deal, so this could be the one that finally breaks free.