Is this a cut scene from Houdini? 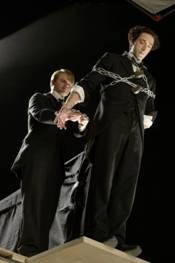 Here's a curious image from a website promoting the just released Houdini miniseries on DVD and Blu-ray in Germany. This shot shows Adrien Brody and Evan Jones, who played Jim Collins, engaged in some sort of dramatic escape action.

There was no scene or shot in the 3+ hour miniseries to match this. It's possible this is just a publicity photo (or preparations for a photo), but it sure looks like Brody and Jones are giving some sort of performance here. Unfortunately, this small image is the only one I can find online.

The German Houdini Blu-ray and DVD can be purchased at Amazon.de.

UPDATE: Mystery solved. This was for an unused poster.
Written by John Cox at 8:00 AM