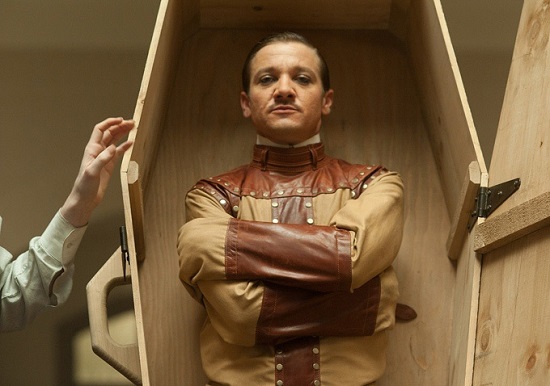 The 2013 film The Immigrant is released this week on DVD and Blu-Ray. The film is set in 1921 New York and features Jeremy Renner as Emil Orlando, a Houdini-like magician and escape artist who competes with Bruno Weiss (Joaquin Phoenix) for the affections of Ewa Cybulski (Marion Cotillard).

I haven't seen the film, but based on the photo of Renner above, it looks like something to check out, if just for the magic and production design. Although you'll notice Renner is sporting a full straitjacket fail.

You can buy The Immigrant at Amazon.com.

UPDATE: The movie is also available on Netflix.
Written by John Cox at 6:53 PM