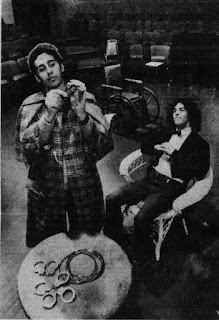 Danny Bilson and Paul DeMeo are a successful creative team who have written and produced Hollywood movies, television shows, and video games. They are maybe most famous for writing one of my favorite films, The Rocketeer (1991).

What I didn't know until recently was that Bilson & DeMeo's first collaboration was on a Houdini-Sherlock Holmes play while they were Theater Arts majors at California State University San Bernardino. It was called The Houdini Deception.

Set in England in 1908, the three act play featured DeMeo as Sherlock Holmes and Bilson as Houdini. Scenes were set at 221B Baker Street and the London't Hippodrome. For good measure, Mata Hari was also thrown into the mix.

The team split research duties, with DeMeo researching Holmes and Bilson tacking Houdini. "Houdini was a driven human being, a publicity crazy person," the young writer told The San Bernardino Sun-Telegram at the time. "He wasn't all sugar and spice. Hopefully, we'll reflect the real Houdini."

The Houdini Deception made it's debut March 2, 1978, and played several performances at the college theater. Said the writers: "We think we can get our play published for other colleges to do, but as far as film and television productions are concerned, it depends on how the marketable it is at the moment. We think we're realistic about it."

It's fun to see how these successful men entered their creative life via Houdini (and Holmes). One wonders if they ever entered the revolving door of development that was Ray Stark's Houdini movie in the '80s and '90s?

Below is original ad artwork for The Houdini Deception from Bilson and DeMeo's Pet Fly Productions Facebook page. 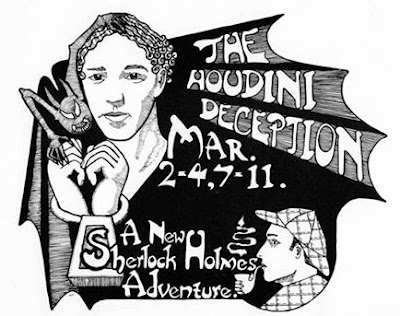