Houdini returns in The Shadow #2 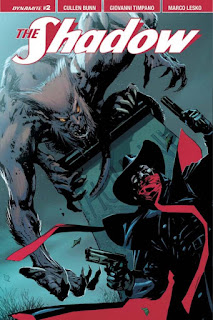 Last year Dynamite Comics revived Walter B. Gibson's The Shadow with a graphic novel featuring Houdini and the famous crime fighter in 1925 New York. Today Dynamite release The Shadow #2, and once again the plot involves Houdini. Here's a description:

As the Shadow continues his crusade against a cabal of magicians, he comes closer to uncovering the truth behind Houdini's message from beyond the grave. But the magicians are bringing in a specialist to eliminate the Shadow--an assassin who uses prestidigitation to lethal effect!


The Shadow #2 is written by Cullen Bunn with artwork by Butch Guice. The cover art is by Giovanni Timpano and features Houdini's gravestone. The graphic novel opens at Houdini's plot at Machpelah Cemetery. You can check out sample panels at the Dynamite website.

Of course, the real Houdini had a strong connection to The Shadow. Creator Walter B. Gibson was Houdini's friend and ghostwriter. Houdini's nickname for Gibson was "Shadow."

You can purchase The Shadow #2 direct from Dynamite Comics or via Amazon.