Houdini at the 67th Emmy Awards

The Emmy escaped Adrien Brody and Uli Edel at the 67th Primetime Emmy Awards held last night in Los Angeles. Brody and Edel were nominated for Best Actor and Best Director for the Houdini miniseries. The awards went instead to Richard Jenkins for his performance in Olive Kitteridge and Lisa Cholodenko for her direction of Olive Kitteridge.

Was Adrien Brody in attendance? Well, check out this clip from Andy Sandberg's opening monologue:

Brody actually was there. He was back in his seat during the Best Actor award presentation by Lady Gaga, and later presented the Emmy to Viola Davis for Best Actress in a Drama Series.

Houdini was nominated for a total of seven Emmys. It came away with one win for "Outstanding Sound Editing For A Limited Series, Movie Or A Special." That award was presented to the sound team at the Creative Arts Emmys held on September 12 and broadcast Saturday night on FXX. 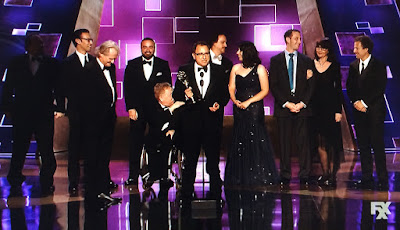 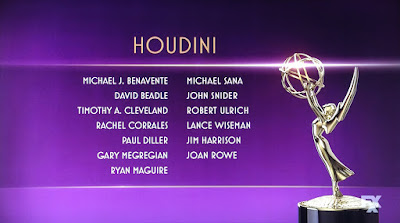 With its one win, the Houdini miniseries ties TNT's Houdini biopic in which Judy Crown won the Emmy for "Outstanding Hairstyle for a Miniseries, Movie or Special" at the 51st Emmy Awards in 1999.