Today sees the release of NCircle Entertainment's Houdini (a.k.a. Little Houdini) on DVD. This is a feature-length French animated film produced by Dandelooo. It has been dubbed into English for this U.S. release. 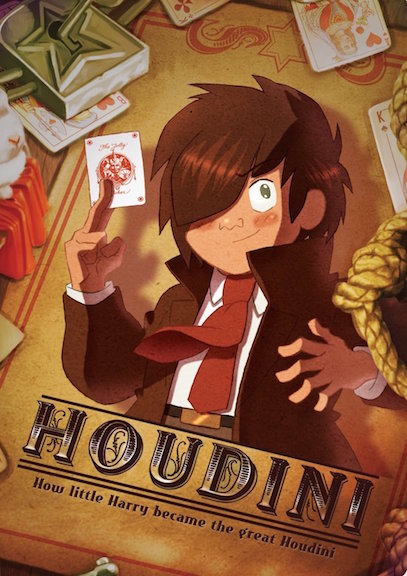 Twelve year old Harry has lived and breathed magic since his early childhood. The problem is that his hometown, Appletown, is not the best place for his natural talent to blossom. Although he rehearses endlessly in his parents' barn he realizes that his dream is just that a dream. One day Harry catches the glimpse of a chance: the New York mayor has announced a magic competition due to the official opening of the Statue of Liberty. Unfortunately, there is a slight problem with this competition, in order to try out one must be trained by a real magician. Poor Harry doesn't know a single one. Until Harry s father runs into the magician, the Great Tesla, in town and Tesla promises to see Harry. Despite the young boy s lack of knowledge Tesla spots talent, creativity and boldness in Harry. He decides to give him a chance and invites him to his own home, accompanied by his niece, Beth, and his assistant, Amrold. Tesla will teach Harry the basics of magic, his tricks but will also test him. Will Harry be strong enough to become a true magician?


Purchase Houdini on DVD at Amazon.

UPDATE: Having now watched this, I can report that it is a delight. It's very well made with beautiful animation. The movie also does a nice job of explaining some of the principles of magic. While it's pure fiction, I think kids will enjoy it on many levels. This is a quality contribution to the world of Houdini-inspired cinema.