If you're in Los Angeles and don't have Halloween plans, why not catch the acclaimed Smoke & Mirrors now playing at The Odyssey Theatre Ensemble. The play will have two special Halloween performances this Saturday at 2:00 PM and 8:00 PM.

Smoke & Mirrors stars magician Albie Selznick and features Bess Houdini as a character. Bess has been played in past productions by Laura Stahl, Alix Koromazay, Laurie Huff, and Meagan Daine. This weekend she will be played by actress and Burlesque artist Brianna Hurley. 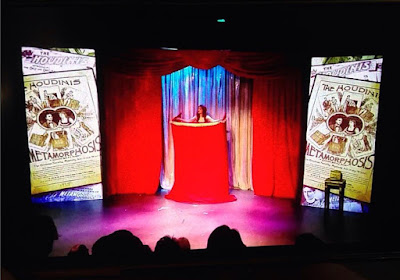 Named “Critic’s Choice” by the Los Angeles Times, Smoke and Mirrors is a heartfelt comedy-drama with mind-bending magic. Created by and starring actor and magician Albie Selznick (Lifetime member of Hollywood’s Magic Castle), Smoke and Mirrors is a semi-autobiographical, fantastical, coming-of-age story about a boy who uses magic to escape reality and face the world after the death of his father

Smoke and Mirrors is a poignant yet humorous play packed with sleight-of-hand and amazing illusions. Selznick takes the audience on his journey while enlisting the assistance of Rabbit, The Oracle and Bess Houdini, who makes a startling appearance!