The Houdini Box musical in the works

Author Brian Selznick has revealed in an interview with Playbill that he's currently working on a stage musical adaptation of his bestselling 2008 children's book, The Houdini Box. Says the author: 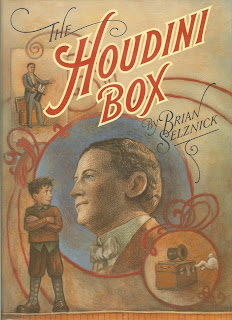 "I've just begun an adaptation of "Houdini Box" for the stage with Dan Moses Schreier. He's a brilliant sound designer and composer, and Jeff Bowen whose going to be writing lyrics for The Houdini Box. We've just begun collaborating. It was a matter of taking a 48-page picture book and figuring out what larger story from this would make sense and demand to be told on-stage, of course with the added curiosity of music and lyrics. What interests me most about the theatre and about musicals is the question, which anyone making a musical asks themselves, "Why are these characters singing? And why are they singing now?" With Houdini Box, we have Houdini himself, who was a creature of the theatre in so many ways, and the idea that the theatre itself becomes part of the way that we create it as a show - that's been very challenging and exciting to think about."


The Houdini Box was adapted as a successful musical play by The Chicago Children's Theatre in 2012. The book was also optioned in 2012 by Chernin Entertainment as a potential movie with filmmaker Kealan O'Rourke (the project appears to have stalled).