Watch 10 minutes of The Grim Game

TCM has posted to their website three clips from their restoration of Houdini's The Grim Game. The combined clips amount to approximately 10 minutes from the movie and feature the new score by Steve Sterner. 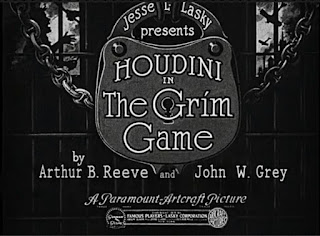 In other Grim Game news, yesterday the film screened at the Barbican's Cinema 1 in London with live piano accompaniment by Neil Brand. According to the official website, the screening was sold out.

Thanks to Dick and Dorothy at the Houdini Museum in Scranton for the alert.