Center For Inquiry welcomes Houdini (and I) 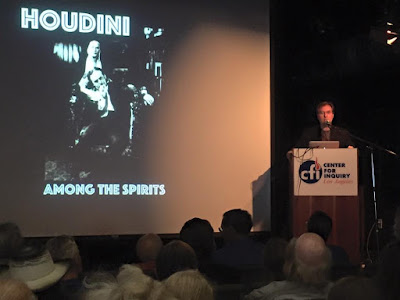 On Sunday I had the great pleasure of giving a lecture on "Houdini Among the Spirits" at the Center for Inquiry (CFI), a national skeptical organization committed to fostering a secular society based on science, reason, freedom of inquiry, and humanist values. I presented the lecture twice that day -- first at the CFI's Los Angeles headquarters in Hollywood and later in Costa Mesa for CFI Orange County.

The lecture in Hollywood was held in the CFI's Steve Allen Theater, and I'm happy to report that it was a full house. I was very pleased to see many of my fellow "Houdini Nuts" in attendance, and also magician and TV star Michael Carbonaro ("The Carbonaro Effect") who was working with TCM that day promoting via Twitter the debut of The Grim Game. It was a happy coincidence that my lecture fell on the same day as the TV premiere of the Houdini movie, and I gave it a nice shout-out during my talk.

This was my first time giving this particular lecture, which covers Houdini's life-long involvement with Spiritualism and his career as debunker. I thought my performance in Hollywood was a little wobbly and the lecture a touch long, so I made some quick cuts and think I found the correct rhythm in Costa Mesa. The audience reaction at both locations was very kind, and we had a lively Q&A session. (Love doing Q&A.) 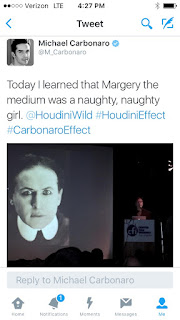 I'm always interested in what parts of the Houdini story seem to most captivate a crowd. I never really know. It's all interesting to me! But that's one of the reasons I like doing these lectures -- I always learn from the audience. In this case, the ladies seemed to steal the show. The crowd seemed especially fascinated with Margery and her battles with Houdini, and also appeared to really sympathize with Bess and her ordeal in 1929 with Arthur Ford. The Bessie clip from Religious Racketeers -- which I also show in my "Houdini in Hollywood" talk -- really seemed to move the audience as never before. Having felt this reaction so strongly in Hollywood, I almost teared up when I played it again in Costa Mesa.

While I don't have any commitments at the moment to give this particular talk again, tomorrow I will be a guest speaker at Tom Ogden's class on the History of Magic at UCLA Extension. The week's class is on magic in the 20th century, and Tom has kindly invited me to cover Houdini. A real honor. And then it's off to San Fransisco for the Official Houdini Seance 2015, which promises to be a spectacular event. Tickets are still available.

Thanks to everyone who came out on Sunday. Also thanks to James Underdown, Bob Ladendorf and Christine Jones for allowing me to bring Houdini to the CFI.