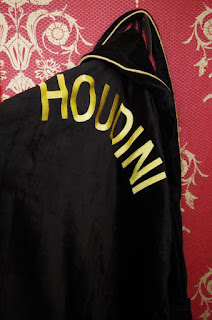 On display are original Houdini artifacts as well as props from last year's Houdini miniseries starring Adrien Brody (David Merlini was the technical advisor on that film). The image to the left is the robe worn by Brody's Houdini.

The "Houdini in Milano" exhibition runs through October 29 at the Hungarian Pavilion. You can get more information via the  official website or my earlier post here.

As a conclusion to the event, on October 29 at 9:00 PM in the Expo Auditorium, David Merlini will attempt an updated version of Houdini's Water Torture Cell "in a way never before staged." Below is the flyer for "Houdini in Milano: The Grand Event." Admission is free but seats are limited. Book tickets here.