As they do each year, The Society of American Magicians (S.A.M.) has proclaimed October 25-31 as National Magic Week in honor of their "Most Illustrious" past president, Harry Houdini. Here is this year's official proclamation:

David Bowers, National President of The Society of American Magicians, proclaimed the week of October 25 to October 31, 2015 as National Magic Week throughout the United States and Canada.

For more than forty years the Society has recognized the anniversary of the death of Harry Houdini with a special “week” of events to highlight the charitable work of the Society throughout the year. During the year the members of the Society donate performances for senior citizens in nursing homes, in VA hospitals, for schools and libraries, and for children who cannot afford the luxury of live entertainment. The free shows are part of service programs sponsored by The S.A.M. and follow the example set by Harry Houdini, a past National President of the Society.

“Magic Week” is when the magicians celebrate this service. Public magic events and exhibits will be taking place all over the country.

Each year governors, mayors, and other governing bodies throughout North America are requested to issue proclamations declaring the last week in October as National Magic Week, encouraging magicians to participate in the activities.


For more that 50 years the S.A.M. has recognized the anniversary of the death of Houdini with this special week of charitable performances. Houdini served as the National President of the S.A.M. from 1917 until his death in 1926. Below is a membership card from Houdini's reign. 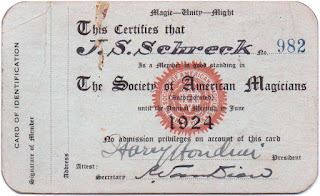