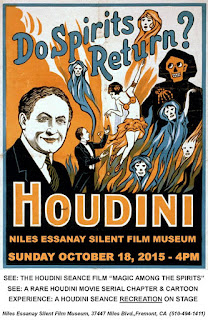 The Niles Essanay Silent Film Museum in Niles, California held a special Houdini event on October 18th. Called "Halloween With Houdini," the evening featured a screening of the documentary, Harry Houdini: Magic Among The Spirits (a.k.a. The Annual Harry Houdini Séances) presented by the film's director Tom Wyrsch. Following the film was a reenactment of a Houdini seance and a chapter from The Master Mystery.

I'm sorry I didn't learn about this event until now as I would have helped get the word out and also included it on our Houdini Calendar. But this has been a jam-packed month for Houdini, and October 18th was an especially busy day. It also saw my own talk on "Houdini Among the Spirits" and the premiere of The Grim Game on TCM.

The Niles Essanay Silent Film Museum covers the history of Niles, the Essanay Film Company, and silent films with an emphasis on pioneering film companies of the San Francisco Bay Area. I'm hoping to visit the museum during my upcoming trip to San Fransisco for The Official Houdini Seance 2015. It's my belief that Houdini himself visited Niles in 1915 and is where he took his famous photo with Charlie Chaplin (who was making movies for Essanay at the time). Maybe I'll feel those ghosts! 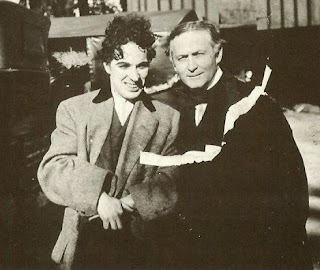 You can learn more about The Niles Essanay Silent Film Museum at their official website. For more on Tom Wyrsch's Houdini documentary visit Garfield Lane Productions.

UPDATE: Having now visited the museum and spoken with the helpful staff, it appears this photo of Houdini and Chaplin was not taken in Niles. By November of 1915, Chaplin was renting studio space in Los Angeles. Sorry, Niles, we tried.