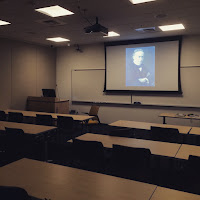 Yesterday I had the great pleasure of being a guest speaker at Tom Ogden's class on the History of Magic at UCLA Extension. Yesterday's class focused on magic in the 20th century, and Tom kindly invited me to cover Houdini. It was a real honor and the students seemed to enjoy it.

Houdini and I took up the first hour of the class. In the second, Tom discussed other famous magicians of the 20th Century and also demonstrating several magic tricks. I was "volunteered" to be sawed in half on a classroom table, which I'm happy to report was a success! (Only afterwards did Tom admit that he's never attempted that trick before.)

Thanks to Tom Ogden and Mark Willoughby for the fun and informative day. Be sure and visit Tom's official website.
Written by John Cox at 1:11 PM