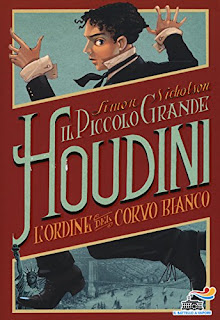 Simon Nicholson's first Young Houdini novel has been released in Italian with what the author describes as "heart-thundering illustrations" by artist Iacopo Bruno.

Il piccolo grande Houdini: L'Ordine del Corvo Bianco is published by Piemme and is available to purchase from the Italian Amazon.it.

So far there have been two books in Simon Nicholson's Young Houdini series: The Magician's Fire and The Demon Curse. A third book, The Silent Assassin, will be released in the UK in early 2016.