Out West With Houdini

Here's a unique new take on Houdini fiction. Out West With Houdini by Robert M. Fells finds the Handcuff King in action in the Old West! Here's a description: 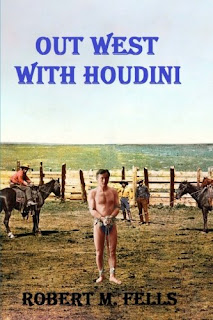 Young lawyer Arthur Jeffries travels out west in the 1890s to locate some fortunate individuals who are unaware they have inherited wealth. Finding them is easy but extricating them from jail or worse seems impossible. That is, until Arthur meets an unknown magician named Houdini who reveals the secrets of mind reading, handcuff escapes, disappearing from a locked trunk, and the Indian Fakir Mind Control. Arthur puts this knowledge to good use on behalf of his clients.


Before you think this is pure fantasy, know that Houdini lived at the time when there was still an American frontier. During his struggling years of 1891-1900, he certainly would have played towns still populated by cowboys and frontier types.

Purchase Out West With Houdini at Amazon.com (U.S.) and Amazon.co.uk (UK). The book is available as a paperback and for Kindle.
Written by John Cox at 11:46 AM