Houdini vs. the Siberian Transport Cell Part II: How did he do it?

Houdini's escape from the Siberian Transport Cell or "Carette" in Russia on May 10, 1903 is one of his most famous and celebrated feats. But like the Mirror Handcuff challenge, the carette escape is steeped in mythology. In PART I we looked at the escape itself. Today, we tackle the question of how Houdini did it. 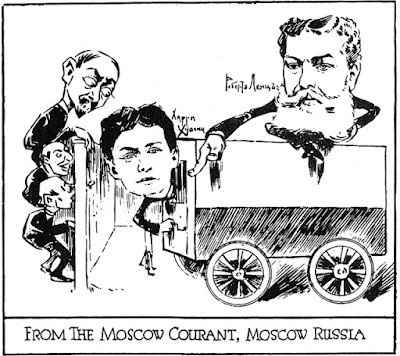 So how did Houdini escape from Chief Lebedeff's dreaded Siberian Transport Cell at Butyrskaya Prison? Interestingly, this is one escape that Houdini didn't feel the need to keep secret. In an article he wrote in March 1904 titled "Russia" (reproduced in Pat Culliton's Houdini The Key), Houdini freely admits that he picked the lock through the window, although the task was not an easy one:

The lock was on the outside of the door, about 30 inches below the window in the door, the former being about 6 inches square, and divided into four by iron bars. Through this small aperture I had to do my work. For half and hour I struggled with the lock for all I knew, during which I could hear the police laughing and chuckling. However, I persevered, and at the end of 45 minutes I had the satisfaction of seeing the door swing open. But I was very exhausted and was pouring down with perspiration, cold as it was.


How exactly Houdini smuggled in his lock picking tools is one secret he did not reveal. 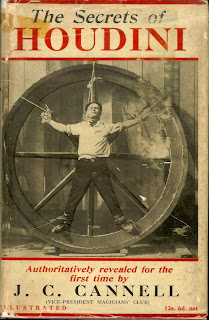 Now, one would think this would be the final word on how Houdini escaped from the carette, especially as this was also the explanation given in the first Houdini biography, Houdini His Life Story. But in 1931, the book The Secrets of Houdini by J.C. Cannell offered up a radically different method that would up-end the story of the carette escape for the next 70 years.

In Cannell's version, the police insisted that the carette door be reinforced with additional locks and bolts that could not be reached from the inside. At first Houdini objected to this new condition, but eventually conceded. But according to Cannell, Houdini's objections were just clever misdirection, as he never intended to exit via the door:

It was upon the floor of the van that Houdini concentrated in carrying out his escape, in which there was a good deal of hard work and skill. He had in his possession a small cutter with which to cut through the zinc floor in such a way as afterwards to be able to smooth over the joint so that it would not be noticeable. [...] When he had neatly pierced the zinc, he pushed the edges back and reached the wooden floor of the van. The next part of his task was to remove enough of the planking to enable him to squeeze through the floor, while he performed the task of readjusting the zinc so as to leave no trace of the fine, straight cut he had made at the point where the sides of the floor and van met. [...] The replacement of the floor planks was the simplest part of this remarkable escape.


How Houdini acquired his escape tools is, once again, not part of the explanation.

It should be noted that Will Goldston published The Secrets of Houdini and was probably responsible for much of the content. Goldston, who knew Houdini, is also responsible for the story of how Bess managed to get the Mirror handcuff key and pass it to Houdini in a glass of water. Today many feel that's an elaborate fiction created Goldston's book, Sensational Tales of Mystery Men. So was he doing the same thing here? 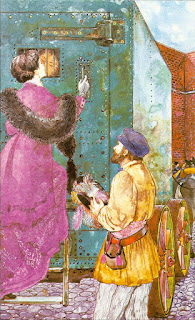 The idea of Houdini sawing through the carette floor proved irresistible to William Lindsey Gresham. Gresham embraced the story and embellished it, first in an article for the July 1958 issue of Saga magazine ("True Adventures for Men"), and a year later in his own biography, Houdini The Man Who Walked Through Walls. Gresham also provided an explanation for how Houdini acquired his tools.

In Gresham's account, Lebedeff orders the carette wrapped in chains only after Houdini has been locked inside. Having not agreed to this, Houdini complains loudly from inside, but the police ignore him. Bess is present during the escape, and she rushes to the door and delivers a lingering kiss before being pulled away by the police. During the kiss, she passes Harry the necessary tools for his escape, including a saw capable of piercing the zinc floor. Despite the improbability of this, and that fact that no previous account has Bess present, Gresham went all in on the floor sawing theory.

Ten years later, Milbourne Christopher threw cold water on the theory in his own biography, Houdini The Untold Story. Christopher rejected the floor sawing story along with the veracity of the original source, the Cannel book, writing: "This "explanation," which has been accepted an expanded by other writers, is as fanciful as many of Cannell's other "revelations."" 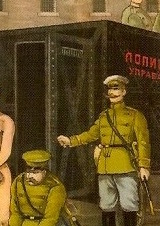 Christopher says he believes Houdini reached through the window and picked the lock. For him, the tell is in the lithograph Houdini created in Leipzig showing the escape. That illustration shows the carette window smaller and located higher up on the door than it was in reality. "A showman would not give a clue to his method in his advertising," Christopher argued. It is true that Houdini did modify his apparatus on posters to conceal the methods of escape.

Kenneth Silverman in Houdini!!! The Career of Ehrich Weiss (1996), which offered a much needed house cleaning of Houdini history, makes no mention of the floor sawing theory. Instead, Silverman goes with lock picking, saying that Houdini probably used an extension tool of some kind to reach the lock. Silverman admits he doesn't know how Houdini smuggled the necessary tools into the van, but he does note that "the Russian police were famously bribable." 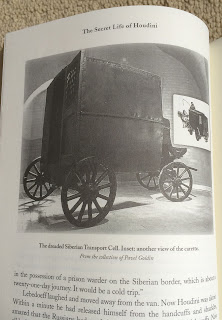 Just when it looked like the floor sawing theory was consigned to popular Houdini mythology, the story made a roaring comeback in the 2006 biography, The Secret Life of Houdini, The Making of America's First Superhero by William Kalush and Larry Sloman. This account includes all the dramatic embellishments as well as verbatim dialogue between Lebedeff and Houdini. It's also said that Houdini concealed his saw tool in a false finger. (Bess is not a participant in this version.)

But the source book, The Secret Life of Houdini Laid Bare, reveals no new evidence for the old theory. Instead, the author's cite Gresham's colorful Saga article and biography. The notion that Houdini used a false finger (which I think has some merit) is revealed to be speculation based on the image of Houdini's false finger in his book Handcuffs Secrets. On the plus side, the book does offer a nice photo of a Transport Cell that might be very close in appearance to the one that Houdini escaped.

Finally, Patrick Culliton in his 2010 book Houdini The Key again rejects the floor sawing theory and returns to lock picking. Like Silverman, Patrick believes an extension tool was necessary. As to how he acquired the tool (which today is owned by Joe Holland), Pat suggests a bold new theory. In the Leipzig lithograph we see Houdini shackled with restraints that have large lunch box size weights below each wrist (right). Patrick believes Houdini's tools were concealed inside these weights, planted by a confederate.

The time it took for Houdini to escape the carette has also undergone revision over the years. Houdini originally said it took him 45 minutes. By the time of the Leipzig lithograph, that had been reduced to 28 minutes. Later it became as little as 11 minutes. But all accounts agree on the most important point. Houdini escaped!

In 2013, David Saltman of The Houdini File opened a fresh new inquiry into the carette escape. In all accounts, Houdini's nemesis is said to have been Chief of Secret Police Lebedeff. But David could find no police officer by that name in Russia at this time. Interestingly, the notary who signed Houdini's Russian contract was Mihail Lebedeff. Coincidence? Confusion? Or did Houdini for some reason co-opt the name of his notary for his nemesis? The mysteries continue.

It's safe to assume the Transport Cell Houdini escaped from that day, with or without a hole in the floor, is long gone. In the 1950s, Stalin erected factories around Butyrskaya Prison to obscure it from view. For years it was unmarked on Russian maps.

Then on October 30, 1989, Russian magician and S.A.M. member Alexander "Sasha" Vorobiev received special permission to visit the prison museum. There he discovered on display the original manacles said to have held Houdini that day. The museum also had a police uniform from 1903, the year of Houdini's escape. 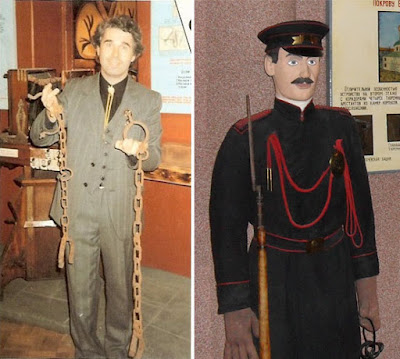 Alexander Vorobiev with the Houdini manacles. Police uniform from 1903.

Despite being put up for sale in 2006, Butyrskaya still stands today. It's still a prison and still has its museum. While Houdini's escape was considered a source of embarrassment in 1903, today it's a source of pride. The official website even gives a brief description of the feat (here translated via Google): 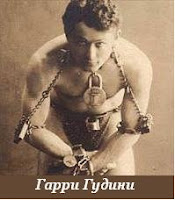 In May 1908 [sic] in Moscow there was the famous American magician Harry Houdini. For marketing purposes, he made a bet that he could escape from any prison in Moscow. The Butyrskaya prison experiment was conducted: thoroughly searched, Houdini put in chains and locked in a special Bound, an iron box. After 28 minutes, covered with sweat, Houdini appeared in front of the audience goggles.


So maybe Houdini's greatest accomplishment that day in May was to perform a feat that would outlast both Imperial and Communist governments, and today stand as a proud part of Russian history.

Illustration of Bess at the carette door by Annabel Large from The Great Escaper (1979) by David Warren. Photograph of Alexander Vorobiev with Houdini's shackles from Conjuring (1992) by James Randi. Additional thanks to Arthur Moses.