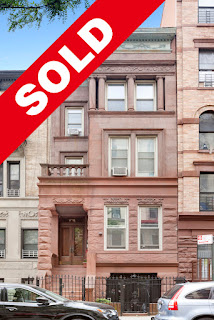 Big news today. Houdini's former home at 278 W. 113th Street in New York is now officially SOLD. The house had been "under contract" since January. The only information the realtor can share is that the buyer is "a family of four and the wife is a doctor."

Houdini's 278 was owned by Fred Thomas, who bought the house in 1991. It went on the market in June 2017 for $4.6 million. The price dropped to $3.6 million in December. I attended the first open house and gave a detailed report on what I saw inside.

Congratulations to the new owners and to our friends at Douglas Elliman Real Estate. Sounds like this great house is in good hands.