Houdini in the 1981 Ragtime movie

Houdini's role in E.L. Doctorow's bestselling 1975 novel Ragtime is well known. You could even say the great "Houdini Renaissance" of the 1970s started with Ragtime. Houdini also appeared in the hit Broadway musical. He even sings a song. But far less known is his appearance in the 1981 film adaptation directed by Miloš Forman.

When the movie was announced in the November 2, 1980 issue of the Los Angeles Times, the paper used a nice still of Houdini in action. This was exciting as it suggested Houdini would be a large part of the film. Houdini was played by Jeffrey DeMunn, who reportedly performed the suspended straitjacket escape himself.

However, when the movie was released in November 1981, Houdini's role consisted of only two brief, silent appearances. I don't know when this reduction took place, but considering both John Belushi and Harvey Keitel were considered for the part (with some reports saying Keitel was "set" for the role), it must have been a larger part at some point in the development process.

Ragtime author E.L. Doctorow did not participate in the development of the screenplay as he believed a feature film could not do justice to his novel and that it should be done as a ten-part television miniseries. He may have been right. The first cut came in at over three hours and had to be shortened to its final 2:36 runtime. Was Houdini part of any of that cut footage I wonder?

While Houdini's appearances are brief, they are not insignificant. The first is during a newsreel montage that opens the film. Here we learn Houdini is departing on a nationwide tour (with his mother). This tells us that during this gilded age, the world's greatest magician was, reassuringly, everywhere. 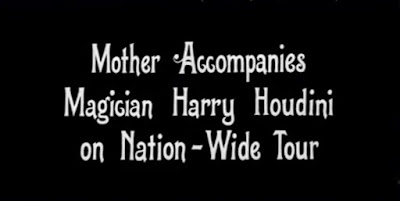 The movie then concludes with Houdini doing a suspended straitjacket escape high above a crowd, even above the American flag. Perhaps this is an expression of the ultimate high point of the era, the soaring triumph of the individual. The irony is that the crowd below are reading newspapers announcing the start of World War I -- the end of that very era, and the movie.

Despite 8 Oscar nominations, Ragtime was greeted with tepid reviews and box office. The New York Times wrote: "The movie, which opens today at the Loews State and Coronet Theaters, is sorrowful, funny and beautiful. It is also, finally, very unsatisfactory." Jeffrey DeMunn would go on to play Houdini again in the 1986 television movie Young Harry Houdini, making him the only two-time Houdini (at least on film).

I also find the movie to be just okay. Certainly I would have preferred more Houdini. But the trailer (below) still gives me chills. "Bad time. Good time. Ragtime." Love it.

For more appearances of Houdini in film and television, check out my page devoted to The many lives of Harry Houdini on film.