Is Houdini haunting the Eastbourne Hippodrome? 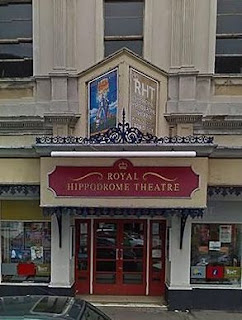 Yahoo7 has a story today about a ghostly photograph taken at the Eastbourne Hippodrome in the UK where Houdini performed in 1905. According to the article:


Daniel, Portsmouth, took the image in 2015 with his partner Lauren Higgins, 27, but he is only now revealing the image as he claims it is 'by far the best picture' he has taken on a ghost hunt.

"It could have been Houdini visiting, especially since it was on stage and then disappeared quickly,” the dad-of-two says.


By coincidence (or not), Sussux Darkside is planning a "Ghost Hunt & Houdini Seance" at the Eastbourne Hippodrome at the end of this month. I Believe (in publicity).

Click here to see the ghostly pic at Yahoo7.